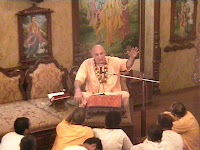 All of you must now give full support to Grandfather Bhisma, as you stand at your respective strategic points of entrance into the phalanx of the army.

Duryodhana, after praising the prowess of Bhisma, further considered that others might think that they had been considered less important, so in his usual diplomatic way, he tried to adjust the situation in the above words. He emphasized that Bhismadeva was undoubtedly the greatest hero, but he was an old man, so everyone must especially think of his protection from all sides. He might become engaged in the fight, and the enemy might take advantage of his full engagement on one side. Therefore, it was important that other heroes not leave their strategic positions and allow the enemy to break the phalanx. Duryodhana clearly felt that the victory of the Kurus depended on the presence of Bhismadeva. He was confident of the full support of Bhismadeva and Dronacarya in the battle because he well knew that they did not even speak a word when Arjuna's wife Draupadi, in her helpless condition, had appealed to them for justice while she was being forced to appear naked in the presence of all the great generals in the assembly. Although he knew that the two generals had some sort of affection for the Pandavas, he hoped that these generals would now completely give it up, as they had done during the gambling performances.

Then Bhisma, the great valiant grandsire of the Kuru dynasty, the grandfather of the fighters, blew his conchshell very loudly, making a sound like the roar of a lion, giving Duryodhana joy.

The grandsire of the Kuru dynasty could understand the inner meaning of the heart of his grandson Duryodhana, and out of his natural compassion for him he tried to cheer him by blowing his conchshell very loudly, befitting his position as a lion. Indirectly, by the symbolism of the conchshell, he informed his depressed grandson Duryodhana that he had no chance of victory in the battle, because the Supreme Lord Krsna was on the other side. But still, it was his duty to conduct the fight, and no pains would be spared in that connection.

After that, the conchshells, drums, bugles, trumpets and horns were all suddenly sounded, and the combined sound was tumultuous.

On the other side, both Lord Krsna and Arjuna, stationed on a great chariot drawn by white horses, sounded their transcendental conchshells.

In contrast with the conchshell blown by Bhismadeva, the conchshells in the hands of Krsna and Arjuna are described as transcendental. The sounding of the transcendental conchshells indicated that there was no hope of victory for the other side because Krsna was on the side of the Pandavas. Jayas tu pandu-putranam yesam pakse janardanah. Victory is always with persons like the sons of Pandu because Lord Krsna is associated with them. And whenever and wherever the Lord is present, the goddess of fortune is also there because the goddess of fortune never lives alone without her husband. Therefore, victory and fortune were awaiting Arjuna, as indicated by the transcendental sound produced by the conchshell of Visnu, or Lord Krsna. Besides that, the chariot on which both the friends were seated had been donated by Agni (the fire-god) to Arjuna, and this indicated that this chariot was capable of conquering all sides, wherever it was drawn over the three worlds.

Arjuna is referred to as Dhanañjaya in this verse because he helped his elder brother in fetching wealth when it was required by the king to make expenditures for different sacrifices. Similarly, Bhima is known as Vrkodara because he could eat as voraciously as he could perform herculean tasks, such as killing the demon Hidimba. So the particular types of conchshell blown by the different personalities on the side of the Pandavas, beginning with the Lord's, were all very encouraging to the fighting soldiers. On the other side there were no such credits, nor the presence of Lord Krsna, the supreme director, nor that of the goddess of fortune. So they were predestined to lose the battle—and that was the message announced by the sounds of the conchshells.

King Yudhisthira, the son of Kunti, blew his conchshell, the Ananta-vijaya, and Nakula and Sahadeva blew the Sughosa and Manipuspaka. That great archer the King of Kasi, the great fighter Sikhandi, Dhrstadyumna, Virata, the unconquerable Satyaki, Drupada, the sons of Draupadi, and the others, O King, such as the mighty-armed son of Subhadra, all blew their respective conchshells.

Sañjaya informed King Dhrtarastra very tactfully that his unwise policy of deceiving the sons of Pandu and endeavoring to enthrone his own sons on the seat of the kingdom was not very laudable. The signs already clearly indicated that the whole Kuru dynasty would be killed in that great battle. Beginning with the grandsire, Bhisma, down to the grandsons like Abhimanyu and others—including kings from many states of the world—all were present there, and all were doomed. The whole catastrophe was due to King Dhrtarastra, because he encouraged the policy followed by his sons.

The blowing of these different conchshells became uproarious. Vibrating both in the sky and on the earth, it shattered the hearts of the sons of Dhrtarastra.

When Bhisma and the others on the side of Duryodhana blew their respective conchshells, there was no heart-breaking on the part of the Pandavas. Such occurrences are not mentioned, but in this particular verse it is mentioned that the hearts of the sons of Dhrtarastra were shattered by the sounds vibrated by the Pandavas' party. This is due to the Pandavas and their confidence in Lord Krsna. One who takes shelter of the Supreme Lord has nothing to fear, even in the midst of the greatest calamity.