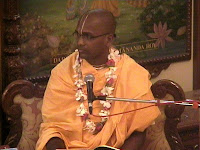 2009-05-19
Srimad Bhagavatam 07.15.10 - From Being Merciless To Being Merciful (download mp3)
by Narahari Prabhu at ISKCON Chowpatty
www.iskcondesiretree.net

Upon seeing the person engaged in performing the sacrifice, animals meant to be sacrificed are extremely afraid, thinking, "This merciless performer of sacrifices, being ignorant of the purpose of sacrifice and being most satisfied by killing others, will surely kill us."

Animal sacrifice in the name of religion is current practically all over the world in every established religion. It is said that Lord Jesus Christ, when twelve years old, was shocked to see the Jews sacrificing birds and animals in the synagogues and that he therefore rejected the Jewish system of religion and started the religious system of Christianity, adhering to the Old Testament commandment "Thou shalt not kill." At the present day, however, not only are animals killed in the name of sacrifice, but the killing of animals has increased enormously because of the increasing number of slaughterhouses. Slaughtering animals, either for religion or for food, is most abominable and is condemned herein. Unless one is merciless, one cannot sacrifice animals, either in the name of religion or for food.