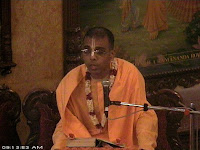 The ritualistic ceremonies and sacrifices known as agni-hotra-yajña, darsa-yajña, purnamasa-yajña, caturmasya-yajña, pasu-yajña and soma-yajña are all symptomized by the killing of animals and the burning of many valuables, especially food grains, all for the fulfillment of material desires and the creation of anxiety. Performing such sacrifices, worshiping Vaisvadeva, and performing the ceremony of Baliharana, which all supposedly constitute the goal of life, as well as constructing temples for demigods, building resting houses and gardens, digging wells for the distribution of water, establishing booths for the distribution of food, and performing activities for public welfare—these are all symptomized by attachment to material desires.

My dear King Yudhisthira, when oblations of ghee and food grains like barley and sesame are offered in sacrifice, they turn into celestial smoke, which carries one to successively higher planetary systems like the kingdoms of Dhuma, Ratri, Krsnapaksa, Daksinam and ultimately the moon. Then, however, the performers of sacrifice descend again to earth to become herbs, creepers, vegetables and food grains. These are eaten by different living entities and turned to semen, which is injected into female bodies. Thus one takes birth again and again.

"When those who follow the pravrtti-marga have enjoyed heavenly sense pleasure, they return to this mortal planet again. Thus, through the Vedic principles, they achieve only flickering happiness." Following the pravrtti-marga, the living entity who desires to be promoted to the higher planetary systems performs sacrifices regularly, and how he goes up and comes down again is described here in Srimad-Bhagavatam, as well as in Bhagavad-gita. It is also said, traigunya-visaya vedah: "The Vedas deal mainly with the three modes of material nature." The Vedas, especially three Vedas, namely Sama, Yajur and Rk, vividly describe this process of ascending to the higher planets and returning. But Krsna advises Arjuna, traigunya-visaya veda nistraigunyo bhavarjuna: one has to transcend these three modes of material nature, and then one will be released from the cycle of birth and death. Otherwise, although one may be promoted to a higher planetary system such as Candraloka, one must again come down (ksine punye martya-lokam visanti [Bg. 9.21]). After one's enjoyment due to pious activities is finished, one must return to this planet in rainfall and first take birth as a plant or creeper, which is eaten by various animals, including human beings, and turned to semen. This semen is injected into the female body, and thus the living entity takes birth. Those who return to earth in this way take birth especially in higher families like those of brahmanas.

It may be remarked in this connection that even the modern so-called scientists who are going to the moon are not able to stay there, but are returning to their laboratories. Therefore, whether one goes to the moon by modern mechanical arrangements or by performing pious activities, one must return to earth. That is clearly stated in this verse and explained in Bhagavad-gita. Even if one goes to the higher planetary systems (yanti deva-vrata devan [Bg. 9.25]), one's place there is not secure; one must return to martya-loka. Abrahma-bhuvanal lokah punar avartino 'rjuna: [Bg. 8.16] aside from the moon, even if one goes to Brahmaloka, one must return. Yam prapya na nivartante tad dhama paramam mama: but if one goes back home, back to Godhead, he need not return to this material world.