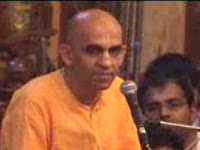 Sri Sukadeva Gosvami said: When the Lord delivered Gajendra, King of the elephants, all the demigods, sages and Gandharvas, headed by Brahma and Siva, praised this activity of the Supreme Personality of Godhead and showered flowers upon both the Lord and Gajendra.

It is evident from this chapter that great sages like Devala Rsi, Narada Muni and Agastya Muni will sometimes curse someone. The curse of such a personality, however, is in fact a benediction. Both the crocodile, who had been a Gandharva in his previous life, and Gajendra, who had been a king named Indradyumna, were cursed, but both of them benefited. Indradyumna, in his birth as an elephant, attained salvation and became a personal associate of the Lord in Vaikuntha, and the crocodile regained his status as a Gandharva. We find evidence in many places that the curse of a great saint or devotee is not a curse but a benediction.