Surrender Is Basic Qualification Of Prayers 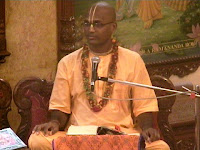 Sri Sukadeva Gosvami continued: When the King of the elephants was describing the supreme authority, without mentioning any particular person, he did not invoke the demigods, headed by Lord Brahma, Lord Siva, Indra and Candra. Thus none of them approached him. However, because Lord Hari is the Supersoul, Purusottama, the Personality of Godhead, He appeared before Gajendra.

From the description of Gajendra, he apparently was aiming at the supreme authority although he did not know who the supreme authority is. He conjectured, "There is a supreme authority who is above everything." Under the circumstances, the Lord's various expansions, such as Lord Brahma, Lord Siva, Candra and Indra, all thought, "Gajendra is not asking our help. He is asking the help of the Supreme, who is above all of us." As Gajendra has described, the Supreme Lord has various parts and parcels, including the demigods, human beings and animals, all covered by separate forms. Although the demigods are in charge of maintaining different aspects of the universe, Gajendra thought that they were unable to rescue him. Harim vina naiva mrtim taranti: no one can rescue anyone from the dangers of birth, death, old age and disease. It is only the Supreme Personality of Godhead who can rescue one from the dangers of material existence. Therefore an intelligent person, to get free from this dangerous existence, approaches the Supreme Personality of Godhead, not any demigod. As confirmed in Bhagavad-gita (7.20), kamais tais tair hrta jñanah prapadyante 'nya-devatah: those who are unintelligent approach the various demigods for temporary material benefits. Actually, however, these demigods cannot rescue the living entity from the dangers of material existence. Like other living entities, the demigods are merely external parts of the Supreme Personality of Godhead's transcendental body. As stated in the Vedic mantras, sa atma-angany anya devatah. Within the body is the atma, the soul, whereas the various parts of the body like the hands and legs are external. Similarly, the atma of the entire cosmic manifestation is Narayana, Lord Visnu, and all the demigods, human beings and other living entities are parts of His body.