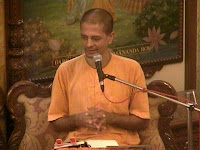 Thus the demons remained silent, opposing the desire of the demigods. Seeing the demons and understanding their motive, the Personality of Godhead smiled. Without discussion, He immediately accepted their proposal by grasping the tail of the snake, and the demigods followed Him.

After thus adjusting how the snake was to be held, the sons of Kasyapa, both demigods and demons, began their activities, desiring to get nectar by churning the ocean of milk.

O son of the Pandu dynasty, when Mandara Mountain was thus being used as a churning rod in the ocean of milk, it had no support, and therefore although held by the strong hands of the demigods and demons, it sank into the water.

Because the mountain had been sunk by the strength of providence, the demigods and demons were disappointed, and their faces seemed to shrivel.

Seeing the situation that had been created by the will of the Supreme, the unlimitedly powerful Lord, whose determination is infallible, took the wonderful shape of a tortoise, entered the water, and lifted the great Mandara Mountain.