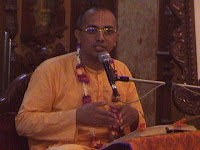 Thereafter, a horse named Uccaihsrava, which was as white as the moon, was generated. Bali Maharaja desired to possess this horse, and Indra, the King of heaven, did not protest, for he had previously been so advised by the Supreme Personality of Godhead.

As the next result of the churning, the king of elephants, named Airavata, was generated. This elephant was white, and with its four tusks it defied the glories of Kailasa Mountain, the glorious abode of Lord Siva.


Translation:
Thereafter, O King, eight great elephants, which could go in any direction, were generated. They were headed by Airavana. Eight she-elephants, headed by Abhramu, were also generated.


Translation:
Generated thereafter from the great ocean were the celebrated gems Kaustubha-mani and Padmaraga-mani. Lord Visnu, to decorate His chest, desired to possess them. Generated next was the parijata flower, which decorates the celestial planets. O King, as you fulfill the desires of everyone on this planet by fulfilling all ambitions, the parijata fulfills the desires of everyone.

Then there appeared the goddess of fortune, Rama, who is absolutely dedicated to being enjoyed by the Supreme Personality of Godhead. She appeared like electricity, surpassing the lightning that might illuminate a marble mountain.

Purport:
Sri means opulence. Krsna is the owner of all opulences.

This peace formula for the world is given in Bhagavad-gita (5.29). When people know that the Supreme Lord, Krsna, is the supreme enjoyer, the supreme proprietor and the most intimate well-wishing friend of all living entities, peace and prosperity will ensue all over the world. Unfortunately, the conditioned souls, being placed into illusion by the external energy of the Lord, want to fight with one another, and therefore peace is disturbed. The first prerequisite for peace is that all the wealth presented by Sri, the goddess of fortune, be offered to the Supreme Personality of Godhead. Everyone should give up his false proprietorship over worldly possessions and offer everything to Krsna. This is the teaching of the Krsna consciousness movement.