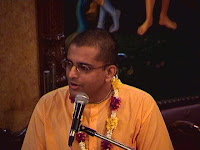 O beautiful girl with beautiful eyebrows, certainly Providence, by His causeless mercy, has sent You to please the senses and minds of all of us. Is this not a fact?

We are now all engaged in enmity among ourselves because of this one subject matter the container of nectar. Although we have been born in the same family, we are becoming increasingly inimical. O thin-waisted woman, who are so beautiful in Your prestigious position, we therefore request You to favor us by settling our dispute.

The demons understood that the beautiful woman had attracted the attention of them all. Therefore they unanimously requested Her to become the arbiter to settle their dispute.

All of us, both demons and demigods, have been born of the same father, Kasyapa, and thus we are related as brothers. But now we are exhibiting our personal prowess in dissension. Therefore we request You to settle our dispute and divide the nectar equally among us.

Having thus been requested by the demons, the Supreme Personality of Godhead, who had assumed the form of a beautiful woman, began to smile. Looking at them with attractive feminine gestures, She spoke as follows.

The Supreme Personality of Godhead, in the form of Mohini, told the demons: O sons of Kasyapa Muni, I am only a prostitute. How is it that you have so much faith in Me? A learned person never puts his faith in a woman.

Canakya Pandita, the great politician and moral instructor, said, visvaso naiva kartavyah strisu raja-kulesu ca: "Never put your faith in a woman or a politician." Thus the Supreme Personality of Godhead, who was pretending to be a woman, warned the demons against putting so much faith in Her, for She had appeared as an attractive woman ultimately to cheat them. Indirectly disclosing the purpose for which She had appeared before them, She said to the sons of Kasyapa, "How is this? You were all born of a great rsi, yet you are putting your faith in a woman who is loitering here and there like a prostitute, unprotected by father or husband. Women in general should not be trusted, and what to speak of a woman loitering like a prostitute?" The word kamini is significant in this connection. Women, especially beautiful young women, invoke the dormant lusty desires of a man. Therefore, according to Manu-samhita, every woman should be protected, either by her husband, by her father or by her grown sons. Without such protection, a woman will be exploited. Indeed, women like to be exploited by men. As soon as a woman is exploited by a man, she becomes a common prostitute. This is explained by Mohini-murti, the Supreme Personality of Godhead.