Krishna Is Juice Of Life And Fire Of Digestion 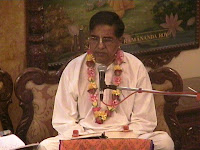 2010-01-10
Bhagavad Gita 15.12-14 - Krishna Is Juice Of Life And Fire Of Digestion (download mp3)
by Radhapati Prabhu at ISKCON Chowpatty
www.iskcondesiretree.net

The unintelligent cannot understand how things are taking place. But one can begin to be established in knowledge by understanding what the Lord explains here. Everyone sees the sun, moon, fire and electricity. One should simply try to understand that the splendor of the sun, the splendor of the moon, and the splendor of electricity or fire are coming from the Supreme Personality of Godhead. In such a conception of life, the beginning of Krsna consciousness, lies a great deal of advancement for the conditioned soul in this material world. The living entities are essentially the parts and parcels of the Supreme Lord, and He is giving herewith the hint how they can come back to Godhead, back to home.

From this verse we can understand that the sun is illuminating the whole solar system. There are different universes and solar systems, and there are different suns, moons and planets also, but in each universe there is only one sun. As stated in Bhagavad-gita (10.21), the moon is one of the stars (naksatranam aham sasi). Sunlight is due to the spiritual effulgence in the spiritual sky of the Supreme Lord. With the rise of the sun, the activities of human beings are set up. They set fire to prepare their foodstuff, they set fire to start the factories, etc. So many things are done with the help of fire. Therefore sunrise, fire and moonlight are so pleasing to the living entities. Without their help no living entity can live. So if one can understand that the light and splendor of the sun, moon and fire are emanating from the Supreme Personality of Godhead, Krsna, then one's Krsna consciousness will begin. By the moonshine, all the vegetables are nourished. The moonshine is so pleasing that people can easily understand that they are living by the mercy of the Supreme Personality of Godhead, Krsna. Without His mercy there cannot be sun, without His mercy there cannot be moon, and without His mercy there cannot be fire, and without the help of sun, moon and fire, no one can live. These are some thoughts to provoke Krsna consciousness in the conditioned soul.


Translation:
I enter into each planet, and by My energy they stay in orbit. I become the moon and thereby supply the juice of life to all vegetables.

Purport:
It is understood that all the planets are floating in the air only by the energy of the Lord. The Lord enters into every atom, every planet, and every living being. That is discussed in the Brahma-samhita. It is said there that one plenary portion of the Supreme Personality of Godhead, Paramatma, enters into the planets, the universe, the living entity, and even into the atom. So due to His entrance, everything is appropriately manifested. When the spirit soul is there, a living man can float on the water, but when the living spark is out of the body and the body is dead, the body sinks. Of course when it is decomposed it floats just like straw and other things, but as soon as the man is dead, he at once sinks in the water. Similarly, all these planets are floating in space, and this is due to the entrance of the supreme energy of the Supreme Personality of Godhead. His energy is sustaining each planet, just like a handful of dust. If someone holds a handful of dust, there is no possibility of the dust's falling, but if one throws it in the air it will fall down. Similarly, these planets, which are floating in the air, are actually held in the fist of the universal form of the Supreme Lord. By His strength and energy, all moving and nonmoving things stay in their place. It is said in the Vedic hymns that because of the Supreme Personality of Godhead the sun is shining and the planets are steadily moving. Were it not for Him, all the planets would scatter, like dust in air, and perish. Similarly, it is due to the Supreme Personality of Godhead that the moon nourishes all vegetables. Due to the moon's influence, the vegetables become delicious. Without the moonshine, the vegetables can neither grow nor taste succulent. Human society is working, living comfortably and enjoying food due to the supply from the Supreme Lord. Otherwise, mankind could not survive. The word rasatmakah is very significant. Everything becomes palatable by the agency of the Supreme Lord through the influence of the moon.


Translation:
I am the fire of digestion in the bodies of all living entities, and I join with the air of life, outgoing and incoming, to digest the four kinds of foodstuff.

Purport:
According to Ayur-vedic sastra, we understand that there is a fire in the stomach which digests all food sent there. When the fire is not blazing there is no hunger, and when the fire is in order we become hungry. Sometimes when the fire is not going nicely, treatment is required. In any case, this fire is representative of the Supreme Personality of Godhead. Vedic mantras (Brhad-aranyaka Upanisad 5.9.1) also confirm that the Supreme Lord or Brahman is situated in the form of fire within the stomach and is digesting all kinds of foodstuff (ayam agnir vaisvanaro yo 'yam antah puruse yenedam annam pacyate). Therefore since He is helping the digestion of all kinds of foodstuff, the living entity is not independent in the eating process. Unless the Supreme Lord helps him in digesting, there is no possibility of eating. He thus produces and digests foodstuff, and by His grace we are enjoying life. In the Vedanta-sutra (1.2.27) this is also confirmed. Sabdadibhyo 'ntah pratisthanac ca: the Lord is situated within sound and within the body, within the air and even within the stomach as the digestive force. There are four kinds of foodstuff—some are drunk, some are chewed, some are licked up, and some are sucked and He is the digestive force for all of them.