One Should Desire Carefully 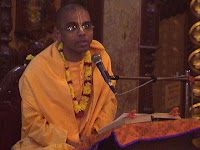 
Translation:
O best of the demigods, I shall now show you My form that is very much appreciated by those who are lusty. Since you want to see that form, I shall reveal it in your presence.

Purport:
Lord Siva's desiring to see Lord Visnu reveal the most attractive and beautiful form of a woman was certainly a joking affair. Lord Siva knew that he could not be agitated by any so-called beautiful woman. "The Daityas may have been bewildered," he thought, "but since even the demigods could not be agitated, what to speak of me, who am the best of all the demigods?" However, because Lord Siva wanted to see Lord Visnu's form as a woman, Lord Visnu decided to impersonate a woman and show him a form that would immediately put him in an ocean of lusty desires. In effect, therefore, Lord Visnu told Lord Siva, "I will show you My form as a woman, and if you become agitated by lusty desires, do not blame Me." The attractive features of a woman are appreciated by those who are affected by lusty desires, but those who are above such desires, who are on the platform of Krsna consciousness, are very difficult to bewilder. Nonetheless, by the supreme desire of the Personality of Godhead, everything can be done. This was to be a test of whether Lord Siva could remain unagitated.