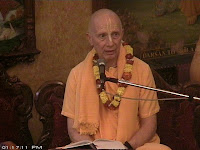 SB 5.19.7
na janma nunam mahato na saubhagam
na van na buddhir nakrtis tosa-hetuh
tair yad visrstan api no vanaukasas
cakara sakhye bata laksmanagrajah
Translation:
One cannot establish a friendship with the Supreme Lord Ramacandra on the basis of material qualities such as one's birth in an aristocratic family, one's personal beauty, one's eloquence, one's sharp intelligence or one's superior race or nation. None of these qualifications is actually a prerequisite for friendship with Lord Sri Ramacandra. Otherwise how is it possible that although we uncivilized inhabitants of the forest have not taken noble births, although we have no physical beauty and although we cannot speak like gentlemen, Lord Ramacandra has nevertheless accepted us as friends?
Purport:
In a prayer to Krsna expressing her feelings, Srimati Kuntidevi called Him akiñcana-gocara. The prefix a means "not," and kiñcana "something of this material world." One may be very proud of his prestigious position, material wealth, beauty, education and so on, but although these are certainly good qualifications in material dealings, they are not necessary for achieving friendship with the Supreme Personality of Godhead. One who possesses all these material qualities is expected to become a devotee, and when he actually does, the qualities are properly utilized. Those who are puffed up by a high birth, wealth, education and personal beauty (janmaisvarya-sruta-sri [SB 1.8.26]) unfortunately do not care for developing Krsna consciousness, nor does the Supreme Personality of Godhead care about all these material qualifications. The Supreme Lord is achieved by devotion (bhaktya mam abhijanati [Bg. 18.55]). One's devotion and sincere desire to serve the Supreme Personality of Godhead are the only qualifications. Rupa Gosvami has also said that the price for achieving God's favor is simply one's sincere eagerness to have it (laulyam ekam mulyam). In the Caitanya-bhagavata it is said:
kholaveca sevakera dekha bhagya-sima
brahma siva kande yara dekhiya mahima
dhane jane panditye krsere nahi pai
kevala bhaktira vasa caitanya-gosañi
"Behold the great fortune of the devotee Kholaveca. Lord Brahma and Siva shed tears upon seeing his greatness. One cannot attain Lord Krsna by any amount of wealth, followers, or learning. Sri Caitanya Mahaprabhu is controlled only by pure devotion." Lord Sri Caitanya Mahaprabhu had a very sincere devotee whose name was Kholaveca Sridhara and whose only business was to sell pots made of the skin of banana trees. Whatever income he had, he used fifty percent for the worship of mother Ganges, and with the other fifty percent he provided for his necessities. On the whole, he was so very poor that he lived in a cottage that had a broken roof with many holes in it. He could not afford brass utensils, and therefore he drank water from an iron pot. Nevertheless, he was a great devotee of Lord Sri Caitanya Mahaprabhu. He is a typical example of how a poor man with no material possessions can become a most exalted devotee of the Lord. The conclusion is that one cannot attain shelter at the lotus feet of Lord Krsna or Sri Caitanya Gosañi through material opulence; that shelter is attainable only by pure devotional service.
anyabhilasita-sunyam
jñana-karmady-anavrtam
anukulyena krsnanu-
silanam bhaktir uttama
[Cc. Madhya 19.167]
"One should render transcendental loving service to the Supreme Lord Krsna favorably and without desire for material profit or gain through fruitive activities or philosophical speculation. That is called pure devotional service."