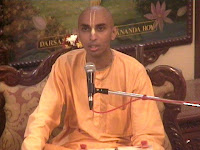 
Translation:
I know that even until now, no one taking birth in your family has been poor-minded or miserly. No one has refused to give charity to brahmanas, nor after promising to give charity has anyone failed to fulfill his promise.

Translation:
O King Bali, never in your dynasty has the low-minded King been born who upon being requested has refused charity to brahmanas in holy places or a fight to ksatriyas on a battlefield. And your dynasty is even more glorious due to the presence of Prahlada Maharaja, who is like the beautiful moon in the sky.

Purport:
The symptoms of a ksatriya are given in Bhagavad-gita. One of the qualifications is the willingness to give charity (dana). A ksatriya does not refuse to give charity when requested by a brahmana, nor can he refuse to fight another ksatriya. A king who does refuse is called low-minded. In the dynasty of Bali Maharaja there were no such low-minded kings.