Brahmanas Are Satisfied With Minimum 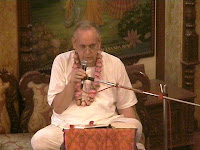 
Translation:
O King, controller of the entire universe, although you are very munificent and are able to give Me as much land as I want, I do not want anything from you that is unnecessary. If a learned brahmana takes charity from others only according to his needs, he does not become entangled in sinful activities.

Purport:
A brahmana or sannyasi is qualified to ask charity from others, but if he takes more than necessary he is punishable. No one can use more of the Supreme Lord's property than necessary. Lord Vamanadeva indirectly indicated to Bali Maharaja that he was occupying more land than he needed. In the material world, all distresses are due to extravagance. One acquires money extravagantly and also spends it extravagantly. Such activities are sinful. All property belongs to the Supreme Personality of Godhead, and all living beings, who are sons of the Supreme Lord, have the right to use the Supreme Father's property, but one cannot take more than necessary. This principle should especially be followed by brahmanas and sannyasis who live at the cost of others. Thus Vamanadeva was an ideal beggar, for He asked only three paces of land. Of course, there is a difference between His footsteps and those of an ordinary human being. The Supreme Personality of Godhead, by His inconceivable prowess, can occupy the entire universe, including the upper, lower and middle planetary systems, by the unlimited measurement of His footsteps.
at May 14, 2010