Purify The Mind With Satisfaction 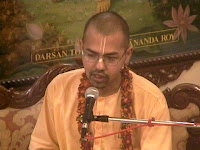 Translation:
Material existence causes discontent in regard to fulfilling one's lusty desires and achieving more and more money. This is the cause for the continuation of material life, which is full of repeated birth and death. But one who is satisfied by that which is obtained by destiny is fit for liberation from this material existence.

Translation:
A brahmana who is satisfied with whatever is providentially obtained is increasingly enlightened with spiritual power, but the spiritual potency of a dissatisfied brahmana decreases, as fire diminishes in potency when water is sprinkled upon it.

Translation:
Therefore, O King, from you, the best of those who give charity, I ask only three paces of land. By such a gift I shall be very pleased, for the way of happiness is to be fully satisfied to receive that which is absolutely needed.

Translation:
Sukadeva Gosvami continued: When the Supreme Personality of Godhead had thus spoken to Bali Maharaja, Bali smiled and told Him, "All right. Take whatever You like." To confirm his promise to give Vamanadeva the desired land, he then took up his waterpot.

Translation:
Understanding Lord Visnu's purpose, Sukracarya, the best of the learned, immediately spoke as follows to his disciple, who was about to offer everything to Lord Vamanadeva.

Translation:
Sukracarya said: O son of Virocana, this brahmacari in the form of a dwarf is directly the imperishable Supreme Personality of Godhead, Visnu. Accepting Kasyapa Muni as His father and Aditi as His mother, He has now appeared in order to fulfill the interests of the demigods.


Translation:
You do not know what a dangerous position you have accepted by promising to give Him land. I do not think that this promise is good for you. It will bring great harm to the demons.

Translation:
This person falsely appearing as a brahmacari is actually the Supreme Personality of Godhead, Hari, who has come in this form to take away all your land, wealth, beauty, power, fame and education. After taking everything from you, He will deliver it to Indra, your enemy.