Srila Prabhupada and the Twelve Mahajans 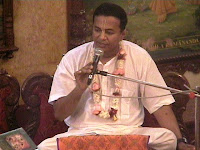 
Translation:
While engaged in performing the sacrifice in the field known as Bhrgukaccha, on the northern bank of the Narmada River, the brahminical priests, the descendants of Bhrgu, saw Vamanadeva to be like the sun rising nearby.

Translation:
O King, because of Vamanadeva's bright effulgence, the priests, along with Bali Maharaja and all the members of the assembly, were robbed of their splendor. Thus they began to ask one another whether the sun-god himself, Sanat-kumara or the fire-god had personally come to see the sacrificial ceremony.


Translation:
While the priests of the Bhrgu dynasty and their disciples talked and argued in various ways, the Supreme Personality of Godhead, Vamanadeva, holding in His hands the rod, the umbrella and a waterpot full of water, entered the arena of the asvamedha sacrifice.

Translation:
Appearing as a brahmana boy, wearing a belt of straw, a sacred thread, an upper garment of deerskin, and matted locks of hair, Lord Vamanadeva entered the arena of sacrifice. His brilliant effulgence diminished the brilliance of all the priests and their disciples, who thus stood from their seats and welcomed the Lord properly by offering obeisances.
SB 8.18.26
yajamanah pramudito
darsaniyam manoramam
rupanurupavayavam
tasma asanam aharat

Translation:
Bali Maharaja, jubilant at seeing Lord Vamanadeva, whose beautiful limbs contributed equally to the beauty of His entire body, offered Him a seat with great satisfaction.

Translation:
Thus offering a proper reception to the Supreme Personality of Godhead, who is always beautiful to the liberated souls, Bali Maharaja worshiped Him by washing His lotus feet.


Translation:
Lord Siva, the best of demigods, who carries on his forehead the emblem of the moon, receives on his head with great devotion the Ganges water emanating from the toe of Visnu. Being aware of religious principles, Bali Maharaja knew this. Consequently, following in the footsteps of Lord Siva, he also placed on his head the water that had washed the Lord's lotus feet.

Purport:
Lord Siva is known as Ganga-dhara, or one who carries the water of the Ganges on his head. On Lord Siva's forehead is the emblem of the half-moon, yet to give supreme respect to the Supreme Personality of Godhead, Lord Siva placed the water of the Ganges above this emblem. This example should be followed by everyone, or at least by every devotee, because Lord Siva is one of the mahajanas. Similarly, Maharaja Bali also later became a mahajana. One mahajana follows another mahajana, and by following the parampara system of mahajana activities one can become advanced in spiritual consciousness. The water of the Ganges is sanctified because it emanates from the toe of Lord Visnu. Bali Maharaja washed the lotus feet of Vamanadeva, and the water with which he did so became equal to the Ganges. Bali Maharaja, who perfectly knew all religious principles, therefore took that water on his head, following in the footsteps of Lord Siva.
at May 06, 2010