Try To Become Enjoyed By Krishna 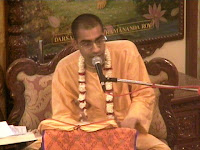 
Translation:
When the great sages saw the Lord as the brahmacari-dwarf Vamana, they were certainly very pleased. Thus they placed before them Kasyapa Muni, the Prajapati, and performed all the ritualistic ceremonies, such as the birthday ceremony.

Purport:
According to Vedic civilization, when a child is born in the family of a brahmana, the birthday ceremony, known as jata-karma, is first performed, and then other ceremonies are also gradually performed. But when this vamana-rupa appeared in the form of a vatu, or brahmacari, His sacred thread ceremony was also performed immediately.
at May 04, 2010