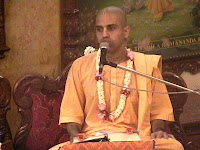 
Translation:
Hiranyakasipu's anger against Lord Visnu persisted until his death. Other people in the bodily concept of life maintain anger only because of false ego and the great influence of ignorance.

Purport:
Generally speaking, even though the conditioned soul is angry, his anger is not perpetual but temporary. It is due to the influence of ignorance. Hiranyakasipu, however, maintained his enmity and his anger against Lord Visnu until the point of death. He never forgot his vengeful attitude toward Visnu for having killed his brother, Hiranyaksa. Others in the bodily concept of life are angry at their enemies but not at Lord Visnu. Hiranyakasipu, however, was everlastingly angry. He was angry not only because of false prestige but also because of continuous enmity toward Visnu.
at May 12, 2010