How Krishna Shows His Special Mercy 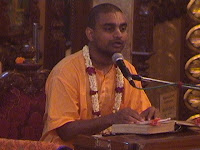 Translation:
My grandfather, the best of all men, who achieved unlimited knowledge and was worshipable for everyone, was afraid of the common men in this world. Being fully convinced of the substantiality afforded by shelter at Your lotus feet, He took shelter of Your lotus feet, against the will of his father and demoniac friends, who were killed by Your own self.

Translation:
Only by providence have I been forcibly brought under Your lotus feet and deprived of all my opulence. Because of the illusion created by temporary opulence, people in general, who live under material conditions, facing accidental death at every moment, do not understand that this life is temporary. Only by providence have I been saved from that condition.

Purport:
Bali Maharaja appreciated the actions of the Supreme Personality of Godhead, although all the members of the demoniac families except Prahlada Maharaja and Bali Maharaja considered Visnu their eternal traditional enemy. As described by Bali Maharaja, Lord Visnu was actually not the enemy of the family but the best friend of the family. The principle of this friendship has already been stated. Yasyaham anugrhnami harisye tad-dhanam sanaih: [SB 10.88.8] the Lord bestows special favor upon His devotee by taking away all his material opulences. Bali Maharaja appreciated this behavior by the Lord. Therefore he said, daivena nitah prasabham tyajita-srih: "It is to bring me to the right platform of eternal life that You have put me into these circumstances."

Actually, everyone should fear the so-called society, friendship and love for which he works so hard all day and night. As indicated by Bali Maharaja by the words janad bhitah, every devotee in Krsna consciousness should always be afraid of the common man engaged in pursuing material prosperity. Such a person is described as pramatta, a madman chasing the will-o'-the-wisp. Such men do not know that after a hard struggle for life one must change his body, with no certainty of what kind of body he will receive next. Those who are completely established in Krsna conscious philosophy and who therefore understand the aim of life will never take to the activities of the materialistic dog race. But if a sincere devotee somehow does fall down, the Lord corrects him and saves him from gliding down to the darkest region of hellish life.

The materialistic way of life is nothing but the repeated chewing of that which has already been chewed. Although there is no profit in such a life, people are enamored of it because of uncontrolled senses. Nunam pramattah kurute vikarma [SB 5.5.4]. Because of uncontrolled senses, people fully engage in sinful activities by which they get a body full of suffering. Bali Maharaja appreciated how the Lord had saved him from such a bewildered life of ignorance. He therefore said that his intelligence had been stunned. Stabdha-matir na budhyate. He could not understand how the Supreme Personality of Godhead favors His devotees by forcibly stopping their materialistic activities.