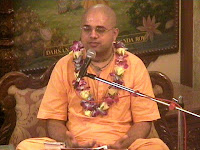 
Translation:
The Supreme Personality of Godhead said: My dear Lord Brahma, because of material opulence a foolish person becomes dull-witted and mad. Thus he has no respect for anyone within the three worlds and defies even My authority. To such a person I show special favor by first taking away all his possessions.

Purport:
A civilization that has become godless because of material advancement in opulence is extremely dangerous. Because of great opulence, a materialist becomes so proud that he has no regard for anyone and even refuses to accept the authority of the Supreme Personality of Godhead. The result of such a mentality is certainly very dangerous. To show special favor, the Lord sometimes makes an example of someone like Bali Maharaja, who was now bereft of all his possessions.