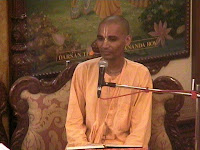 
Translation:
To keep the promise of His father intact, Lord Ramacandra immediately gave up the position of king and, accompanied by His wife, mother Sita, wandered from one forest to another on His lotus feet, which were so delicate that they were unable to bear even the touch of Sita's palms. The Lord was also accompanied by Hanuman [or by another monkey, Sugriva], king of the monkeys, and by His own younger brother Lord Laksmana, both of whom gave Him relief from the fatigue of wandering in the forest. Having cut off the nose and ears of Surpanakha, thus disfiguring her, the Lord was separated from mother Sita. He therefore became angry, moving His eyebrows and thus frightening the ocean, who then allowed the Lord to construct a bridge to cross the ocean. Subsequently, the Lord entered the kingdom of Ravana to kill him, like a fire devouring a forest. May that Supreme Lord, Ramacandra, give us all protection.


Translation:
In the arena of the sacrifice performed by Visvamitra, Lord Ramacandra, the King of Ayodhya, killed many demons, Raksasas and uncivilized men who wandered at night in the mode of darkness. May Lord Ramacandra, who killed these demons in the presence of Laksmana, be kind enough to give us protection.


Translation:
O King, the pastimes of Lord Ramacandra were wonderful, like those of a baby elephant. In the assembly where mother Sita was to choose her husband, in the midst of the heroes of this world, He broke the bow belonging to Lord Siva. This bow was so heavy that it was carried by three hundred men, but Lord Ramacandra bent and strung it and broke it in the middle, just as a baby elephant breaks a stick of sugarcane. Thus the Lord achieved the hand of mother Sita, who was equally as endowed with transcendental qualities of form, beauty, behavior, age and nature. Indeed, she was the goddess of fortune who constantly rests on the chest of the Lord. While returning from Sita's home after gaining her at the assembly of competitors, Lord Ramacandra met Parasurama. Although Parasurama was very proud, having rid the earth of the royal order twenty-one times, he was defeated by the Lord, who appeared to be a ksatriya of the royal order.


Translation:
Carrying out the order of His father, who was bound by a promise to his wife, Lord Ramacandra left behind His kingdom, opulence, friends, well-wishers, residence and everything else, just as a liberated soul gives up his life, and went to the forest with Sita.
Purport:
Maharaja Dasaratha had three wives. One of them, Kaikeyi, served him very pleasingly, and he therefore wanted to give her a benediction. Kaikeyi, however, said that she would ask for the benediction when it was necessary. At the time of the coronation of Prince Ramacandra, Kaikeyi requested her husband to enthrone her son Bharata and send Ramacandra to the forest. Maharaja Dasaratha, being bound by his promise, ordered Ramacandra to go to the forest, according to the dictation of his beloved. And the Lord, as an obedient son, accepted the order immediately. He left everything without hesitation, just as a liberated soul or great yogi gives up his life without material attraction.