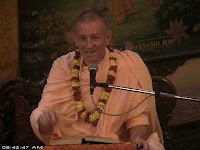 
Translation:
My lord, you are completely aware of the religious principles. As a son never deserves to be killed by his father, here is a brahmana who should be protected by the king, and never killed. How does he deserve to be killed by a rajarsi like you?

Purport:
The word rajarsi refers to a king who behaves like a rsi, or sage. Such a king is also called naradeva because he is considered a representative of the Supreme Lord. Because his duty is to rule the kingdom to maintain brahminical culture, he never desires to kill a brahmana. Generally, a brahmana, woman, child, old man or cow is never regarded as punishable. Thus the wife of the brahmana requested the King to refrain from this sinful act.