Magnanimous Nature Of The Lord 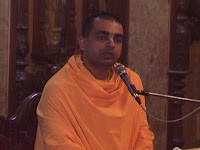 Translation:
Sukadeva Gosvami said: The son of Maharaja Khatvanga was Dirghabahu, and his son was the celebrated Maharaja Raghu. From Maharaja Raghu came Aja, and from Aja was born the great personality Maharaja Dasaratha.


Translation:
Being prayed for by the demigods, the Supreme Personality of Godhead, the Absolute Truth Himself, directly appeared with His expansion and expansions of the expansion. Their holy names were Rama, Laksmana, Bharata and Satrughna. These celebrated incarnations thus appeared in four forms as the sons of Maharaja Dasaratha.

Purport:
Lord Ramacandra and His brothers, Laksmana, Bharata and Satrughna, are all visnu-tattva, not jiva-tattva. The Supreme Personality of Godhead expands into many, many forms. Advaitam acyutam anadim ananta-rupam [Bs. 5.33]. Although they are one and the same, visnu-tattva has many forms and incarnations. As confirmed in the Brahma-samhita (5.39), ramdi-murtisu kala-niyamena tisthan. The Lord is situated in many forms, such as Rama, Laksmana, Bharata and Satrughna, and these forms may exist in any part of His creation. All these forms exist permanently, eternally, as individual Personalities of Godhead, and they resemble many candles, all equally powerful. Lord Ramacandra, Laksmana, Bharata and Satrughna, who, being visnu-tattva, are all equally powerful, became the sons of Maharaja Dasaratha in response to prayers by the demigods.