Nothing Is Palatable To A Pure Devotee Without Krishna 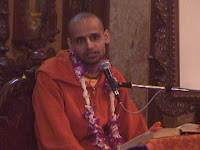 2010-12-15
Srimad Bhagavatam 09.09.44 - Nothing Is Palatable To A Pure Devotee Without Krishna (download mp3)
by Gopinath Candra Prabhu at ISKCON Chowpatty
www.iskcondesiretree.net


Translation:
I was never attracted, even in my childhood, by insignificant things or irreligious principles. I did not find anything more substantial than the Supreme Personality of Godhead.

"The maha-bhagavata, the advanced devotee, certainly sees everything mobile and immobile, but he does not exactly see their forms. Rather, everywhere he immediately sees manifest the form of the Supreme Lord." Although a devotee is within the material world, he has no connection with it. Nirbandhah krsna-sambandhe. He accepts this material world in relationship with the Supreme Personality of Godhead. A devotee may be engaged in earning money, but he uses that money for propagating the Krsna consciousness movement by constructing large temples and establishing worship of the Supreme Personality of Godhead. Khatvanga Maharaja, therefore, was not a materialist. A materialist is always attached to wife, children, home, property and many other things for sense gratification, but, as stated above, Khatvanga Maharaja was not attached to such things, nor could he think of anything existing without the purpose of the Supreme Lord. Isavasyam idam sarvam: [Iso mantra 1] everything is related to the Supreme Personality of Godhead. Of course, this consciousness is not for the ordinary person, but if one takes to the path of devotional service, as prescribed in The Nectar of Devotion, he can be trained in this consciousness and attain perfect understanding. For a Krsna conscious person, nothing is palatable without a relationship with Krsna.