Our Only Shelter Is Krishna 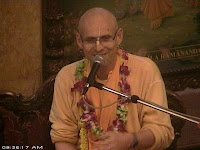 
Translation:
When the chaste wife of the brahmana saw that her husband, who was about to discharge semen, had been eaten by the man-eater, she was overwhelmed with grief and lamentation. Thus she angrily cursed the King.


Translation:
O foolish, sinful person, because you have eaten my husband when I was sexually inclined and desiring to have the seed of a child, I shall also see you die when you attempt to discharge semen in your wife. In other words, whenever you attempt to sexually unite with your wife, you shall die.


Translation:
Thus the wife of the brahmana cursed King Saudasa, known as Mitrasaha. Then, being inclined to go with her husband, she set fire to her husband's bones, fell into the fire herself, and went with him to the same destination.


Translation:
After being thus instructed, the King gave up the future happiness of sexual intercourse and by destiny remained sonless. Later, with the King's permission, the great saint Vasistha begot a child in the womb of Madayanti.


Translation:
Madayanti bore the child within the womb for seven years and did not give birth. Therefore Vasistha struck her abdomen with a stone, and then the child was born. Consequently, the child was known as Asmaka ["the child born of a stone"].


Translation:
From Asmaka, Balika took birth. Because Balika was surrounded by women and was therefore saved from the anger of Parasurama, he was known as Narikavaca ["one who is protected by women"]. When Parasurama vanquished all the ksatriyas, Balika became the progenitor of more ksatriyas. Therefore he was known as Mulaka, the root of the ksatriya dynasty.


Translation:
King Khatvanga was unconquerable in any fight. Requested by the demigods to join them in fighting the demons, he won victory, and the demigods, being very pleased, wanted to give him a benediction. The King inquired from them about the duration of his life and was informed that he had only one moment more. Thus he immediately left his palace and went to his own residence, where he engaged his mind fully on the lotus feet of the Lord.

In Bhagavad-gita the word asamsaya is used to describe the devotee. There the Lord Himself gives this instruction:

"Now hear, O son of Prtha [Arjuna], how by practicing yoga in full consciousness of Me, with mind attached to Me, you can know Me in full, free from doubt." (Bg. 7.1)

"One who knows the transcendental nature of My appearance and activities does not, upon leaving the body, take his birth again in this material world, but attains My eternal abode, O Arjuna." (Bg. 4.9)

Therefore, from the very beginning of one's life one should practice bhakti-yoga, which increases one's attachment for Krsna. If one daily sees the Deity in the temple, makes offerings by worshiping the Deity, chants the holy name of the Personality of Godhead, and preaches about the glorious activities of the Lord as much as possible, he thus becomes attached to Krsna. This attachment is called asakti. When one's mind is attached to Krsna (mayy asakta-manah), one can fulfill the mission of life in one human birth. If one misses this opportunity, one does not know where he is going, how long he will remain in the cycle of birth and death, and when he will again achieve the human form of life and the chance to return home, back to Godhead. The most intelligent person, therefore, uses every moment of his life to render loving service to the Lord.