When Supreme Lord Exhibits His Power 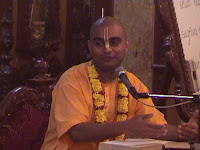 
Translation:
Sukadeva Gosvami said: After constructing a bridge over the ocean by throwing into the water the peaks of mountains whose trees and other vegetation had been shaken by the hands of great monkeys, Lord Ramacandra went to Lanka to release Sitadevi from the clutches of Ravana. With the direction and help of Vibhisana, Ravana's brother, the Lord, along with the monkey soldiers, headed by Sugriva, Nila and Hanuman, entered Ravana's kingdom, Lanka, which had previously been burnt by Hanuman.

Purport:
Great mountain peaks covered with trees and plants were thrown into the sea by the monkey soldiers and began to float by the supreme will of the Lord. By the supreme will of the Lord, many great planets float weightlessly in space like swabs of cotton. If this is possible, why should great mountain peaks not be able to float on water? This is the omnipotence of the Supreme Personality of Godhead. He can do anything and everything He likes, because He is not under the control of the material nature; indeed, material nature is controlled by Him. Mayadhyaksena prakrtih suyate sacaracaram: [Bg. 9.10] only under His direction does prakrti, or material nature, work. Similar information is given in the Brahma-samhita (5.52):

Describing how material nature works, the Brahma-samhita says that the sun moves as desired by the Supreme Personality of Godhead. Consequently, for Lord Ramacandra to construct a bridge over the Indian Ocean with the help of monkey soldiers who threw great mountain peaks into the water is not at all wonderful; it is wonderful only in the sense that it has kept the name and fame of Lord Ramacandra eternally celebrated.