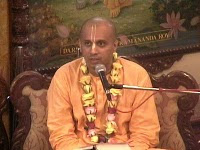 
Translation:
Thereafter, thinking that because the brahmanas have no material desires they should possess the entire world, Lord Ramacandra delivered the land between the east, west, north and south to the acarya.


Translation:
After thus giving everything in charity to the brahmanas, Lord Ramacandra retained only His personal garments and ornaments, and similarly the Queen, mother Sita, was left with only her nose ring, and nothing else.


Translation:
All the brahmanas who were engaged in the various activities of the sacrifice were very pleased with Lord Ramacandra, who was greatly affectionate and favorable to the brahmanas. Thus with melted hearts they returned all the property received from Him and spoke as follows.
Purport:

"Peacefulness, self-control, austerity, purity, tolerance, honesty, wisdom, knowledge, and religiousness these are the qualities by which the brahmanas work." The brahminical character offers no scope for possessing land and ruling citizens; these are the duties of a ksatriya. Therefore, although the brahmanas did not refuse Lord Ramacandra's gift, after accepting it they returned it to the King. The brahmanas were so pleased with Lord Ramacandra's affection toward them that their hearts melted. They saw that Lord Ramacandra, aside from being the Supreme Personality of Godhead, was fully qualified as a ksatriya and was exemplary in character. One of the qualifications of a ksatriya is to be charitable. A ksatriya, or ruler, levies taxes upon the citizens not for his personal sense gratification but to give charity in suitable cases. Danam isvara-bhavah. On one hand, ksatriyas have the propensity to rule, but on the other they are very liberal with charity. When Maharaja Yudhisthira gave charity, he engaged Karna to take charge of distributing it. Karna was very famous as Data Karna. The word data refers to one who gives charity very liberally. The kings always kept a large quantity of food grains in stock, and whenever there was any scarcity of grains, they would distribute grains in charity. A ksatriya's duty is to give charity, and a brahmana's duty is to accept charity, but not more than needed to maintain body and soul together. Therefore, when the brahmanas were given so much land by Lord Ramacandra, they returned it to Him and were not greedy.
at January 18, 2011