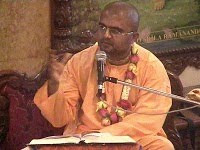 
Translation:
King Dusmanta, who never discharged semen without a result, placed his semen at night in the womb of his Queen, Sakuntala, and in the morning he returned to his palace. Thereafter, in due course of time, Sakuntala gave birth to a son.


Translation:
In the forest, Kanva Muni performed all the ritualistic ceremonies concerning the newborn child. Later, the boy became so powerful that he would capture a lion and play with it.


Translation:
Sakuntala, the best of beautiful women, along with her son, whose strength was insurmountable and who was a partial expansion of the Supreme Godhead, approached her husband, Dusmanta.

Translation:
When the King refused to accept his wife and son, who were both irreproachable, an unembodied voice spoke from the sky as an omen and was heard by everyone present.

Maharaja Dusmanta knew that Sakuntala and the boy were his own wife and son, but because they came from outside and were unknown to the citizens, he at first declined to accept them. Sakuntala, however, was so chaste that an omen from the sky declared the truth so that others could hear. When everyone heard from the omen that Sakuntala and her child were truly the King's wife and son, the King gladly accepted them.