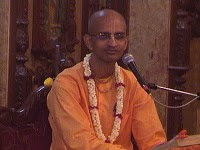 
Translation:
By offering my water to maintain the life of this poor candala, who is struggling to live, I have been freed from all hunger, thirst, fatigue, trembling of the body, moroseness, distress, lamentation and illusion.


Translation:
Having spoken thus, King Rantideva, although on the verge of death because of thirst, gave his own portion of water to the candala without hesitation, for the King was naturally very kind and sober.


Translation:
Demigods like Lord Brahma and Lord Siva, who can satisfy all materially ambitious men by giving them the rewards they desire, then manifested their own identities before King Rantideva, for it was they who had presented themselves as the brahmTana, sudra, candala and so on.


Translation:
King Rantideva had no ambition to enjoy material benefits from the demigods. He offered them obeisances, but because he was factually attached to Lord Visnu, Vasudeva, the Supreme Personality of Godhead, he fixed his mind at Lord Visnu's lotus feet.

If one wants to become a pure devotee of the Supreme Lord, one should not hanker to take benedictions from the demigods. As stated in Bhagavad-gita (7.20), kamais tais tair hrta jñanah prapadyante 'nya-devatah: those befooled by the illusion of the material energy worship gods other than the Supreme Personality of Godhead. Therefore, although Rantideva was personally able to see Lord Brahma and Lord Siva, he did not hanker to take material benefits from them. Rather, he fixed his mind upon Lord Vasudeva and rendered devotional service unto Him. This is the sign of a pure devotee, whose heart is not adulterated by material desires.

"One should render transcendental loving service to the Supreme Lord Krsna favorably and without desire for material profit or gain through fruitive activities or philosophical speculation. That is called pure devotional service."


Translation:
O Maharaja Pariksit, because King Rantideva was a pure devote, always Krsna conscious and free from all material desires, the Lord's illusory energy, maya, could not exhibit herself before him. On the contrary, for him maya entirely vanished, exactly like a dream.
Purport:
As it is said:

Just as there is no chance that darkness can exist in the sunshine, in a pure Krsna conscious person there can be no existence of maya. The Lord Himself says in Bhagavad-gita (7.14):

"This divine energy of Mine, consisting of the three modes of material nature, is difficult to overcome. But those who have surrendered unto Me can easily cross beyond it." If one wants to be free from the influence of maya, the illusory energy, one must become Krsna conscious and always keep Krsna prominent within the core of his heart. In Bhagavad-gita (9.34) the Lord advises that one always think of Him (man-mana bhava mad-bhakto mad-yaji mam namaskuru [Bg. 18.65]). In this way, by always being Krsna-minded or Krsna conscious, one can surpass the influence of maya (mayam etam taranti te [Bg. 7.14]). Because Rantideva was Krsna conscious, he was not under the influence of the illusory energy. The word svapnavat is significant in this connection. Because in the material world the mind is absorbed in materialistic activities, when one is asleep many contradictory activities appear in one's dreams. When one awakens, however, these activities automatically merge into the mind. Similarly, as long as one is under the influence of the material energy he makes many plans and schemes, but when one is Krsna conscious such dreamlike plans automatically disappear.


Translation:
All those who followed the principles of King Rantideva were totally favored by his mercy and became pure devotees, attached to the Supreme Personality of Godhead, Narayana. Thus they all became the best of yogis.

Purport:
The best yogis or mystics are the devotees, as confirmed by the Lord Himself in Bhagavad-gita (6.47):

"Of all yogis, he who always abides in Me with great faith, worshiping Me in transcendental loving service, is most intimately united with Me in yoga and is the highest of all." The best yogi is he who constantly thinks of the Supreme Personality of Godhead within the core of the heart. Because Rantideva was the king, the chief executive in the state, all the residents of the state became devotees of the Supreme Personality of Godhead, Narayana, by the king's transcendental association. This is the influence of a pure devotee. If there is one pure devotee, his association can create hundreds and thousands of pure devotees. Srila Bhaktivinoda Thakura has said that a Vaisnava is meritorious in proportion to the number of devotees he has created. A Vaisnava becomes superior not simply by jugglery of words but by the number of devotees he has created for the Lord. Here the word rantidevanuvartinah indicates that Rantideva's officers, friends, relatives and subjects all became first-class Vaisnavas by his association. In other words, Rantideva is confirmed herein to be a first-class devotee, or maha-bhagavata. Mahat-sevam dvaram ahur vimukteh: [SB 5.5.2] one should render service to such mahatmas, for then one will automatically achieve the goal of liberation. Srila Narottama dasa Thakura has also said, chadiya vaisnava-seva nistara payeche keba: one cannot be liberated by his own effort, but if one becomes subordinate to a pure Vaisnava, the door to liberation is open.
at June 01, 2011