The Remedy For Kaliyuga Defects By Bhismadev 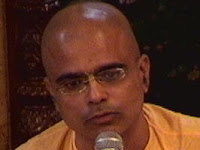 
Translation:
Citrangada, of whom Vicitravrya was the younger brother, was killed by a Gandharva who was also named Citrangada. Satyavati, before her marriage to Santanu, gave birth to the master authority of the Vedas, Vyasadeva, known as Krsna Dvaipayana, who was begotten by Parasara Muni. From Vyasadeva, I [Sukadeva Gosvami] was born, and from him I studied this great work of literature, Srimad-Bhagavatam. The incarnation of Godhead Vedavyasa, rejecting his disciples, headed by Paila, instructed Srimad-Bhagavatam to me because I was free from all material desires. After Ambika and Ambalika, the two daughters of Kasiraja, were taken away by force, Vicitravirya married them, but because he was too attached to these two wives, he had a heart attack and died of tuberculosis.


Translation:
Badarayana, Sri Vyasadeva, following the order of his mother, Satyavati, begot three sons, two by the womb of Ambika and Ambalika, the two wives of his brother Vicitravirya, and the third by Vicitravirya's maidservant. These sons were Dhrtarastra, Pandu and Vidura.

Purport:
Vicitravirya died of tuberculosis, and his wives, Ambika and Ambalika, had no issue. Therefore, after Vicitravirya's death, his mother, Satyavati, who was also the mother of Vyasadeva, asked Vyasadeva to beget children through the wives of Vicitravirya. In those days, the brother of the husband could beget children through the womb of his sister-in-law. This was known as devarena sutotpatti. If the husband was somehow unable to beget children, his brother could do so through the womb of his sister-in-law. This devarena sutotpatti and the sacrifices of asvamedha and gomedha are forbidden in the age of Kali.