How to Enter Hare Krishna Movement 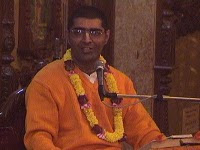 
Translation:
Lord Brahma informed the demigods: Before we submitted our petition to the Lord, He was already aware of the distress on earth. Consequently, for as long as the Lord moves on earth to diminish its burden by His own potency in the form of time, all of you demigods should appear through plenary portions as sons and grandsons in the family of the Yadus.

In this verse from Srimad-Bhagavatam we find the words puraiva pumsavadhrto dhara jvarah. The word pumsa refers to Krsna, who was already aware of how the whole world was suffering because of the increase of demons. Without reference to the supreme power of the Personality of Godhead, demons assert themselves to be independent kings and presidents, and thus they create a disturbance by increasing their military power. When such disturbances are very prominent, Krsna appears. At present also, various demoniac states all over the world are increasing their military power in many ways, and the whole situation has become distressful. Therefore Krsna has appeared by His name, in the Hare Krsna movement, which will certainly diminish the burden of the world. Philosophers, religionists, and people in general must take to this movement very seriously, for man-made plans and devices will not help bring peace on earth. The transcendental sound Hare Krsna is not different from the person Krsna.

There is no difference between the sound Hare Krsna and Krsna the person.


Translation:
The Supreme Personality of Godhead, Sri Krsna, who has full potency, will personally appear as the son of Vasudeva. Therefore all the wives of the demigods should also appear in order to satisfy Him.

Purport:
In Bhagavad-gita (4.9) the Lord says, tyaktva deham punar janma naiti mam eti: after giving up the material body, the devotee of the Lord returns home, back to Godhead. This means that the devotee is first transferred to the particular universe where the Lord is at that time staying to exhibit His pastimes. There are innumerable universes, and the Lord is appearing in one of these universes at every moment. Therefore His pastimes are called nitya-lila, eternal pastimes. The Lord's appearance as a child in the house of Devaki takes place continuously in one universe after another. Therefore, the devotee is first transferred to that particular universe where the pastimes of the Lord are current. As stated in Bhagavad-gita, even if a devotee does not complete the course of devotional service, he enjoys the happiness of the heavenly planets, where the most pious people dwell, and then takes birth in the house of a suci or sriman, a pious brahmana or a wealthy vaisya (sucinam srimatam gehe yoga-bhrasto 'bhijayate [Bg. 6.41]). Thus a pure devotee, even if unable to execute devotional service completely, is transferred to the upper planetary system, where pious people reside. From there, if his devotional service is complete, such a devotee is transferred to the place where the Lord's pastimes are going on. Herein it is said, sambhavantu sura-striyah. Sura-stri, the women of the heavenly planets, were thus ordered to appear in the Yadu dynasty in Vrndavana to enrich the pastimes of Lord Krsna. These sura-stri, when further trained to live with Krsna, would be transferred to the original Goloka Vrndavana. During Lord Krsna's pastimes within this world, the sura-stri were to appear in different ways in different families to give pleasure to the Lord, just so that they would be fully trained before going to the eternal Goloka Vrndavana. With the association of Lord Krsna, either at Dvaraka-puri, Mathura-puri or Vrndavana, they would certainly return home, back to Godhead. Among the sura-stri, the women of the heavenly planets, there are many devotees, such as the mother of the Upendra incarnation of Krsna. It was such devoted women who were called for in this connection.