Incorporation of ISKCON in Newyork 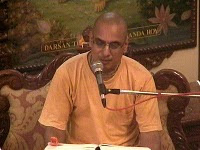 
Translation:
O beloved son, Maharaja Pariksit, when the bride and bridegroom were ready to start, conchshells, bugles, drums and kettledrums all vibrated in concert for their auspicious departure.


Translation:
While Kamsa, controlling the reins of the horses, was driving the chariot along the way, an unembodied voice addressed him, "You foolish rascal, the eighth child of the woman you are carrying will kill you!"

Purport:
The omen spoke of astamo garbhah, referring to the eighth pregnancy, but did not clearly say whether the child was to be a son or a daughter. Even if Kamsa were to see that the eighth child of Devaki was a daughter, he should have no doubt that the eighth child was to kill him. According to the Visva-kosa dictionary, the word garbha means "embryo" and also arbhaka, or "child." Kamsa was affectionate toward his sister, and therefore he had become the chariot driver to carry her and his brother-in-law to their home. The demigods, however, did not want Kamsa to be affectionate toward Devaki, and therefore, from an unseen position, they encouraged Kamsa to offend her. Moreover, the six sons of Marici had been cursed to take birth from the womb of Devaki, and upon being killed by Kamsa they would be delivered. When Devaki understood that Kamsa would be killed by the Supreme Personality of Godhead, who would appear from her womb, she felt great joy. The word vahase is also significant because it indicates that the ominous vibration condemned Kamsa for acting just like a beast of burden by carrying his enemy's mother.
at July 24, 2011