Devotees can go to any extent to Please Krishna 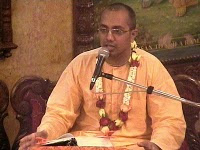 What is painful for saintly persons who strictly adhere to the truth? How could there not be independence for pure devotees who know the Supreme Lord as the substance? What deeds are forbidden for persons of the lowest character? And what cannot be given up for the sake of Lord Krsna by those who have fully surrendered at His lotus feet?

Since the eighth son of Devaki was to kill Kamsa, one might ask what the need was for Vasudeva to deliver the first-born child. The answer is that Vasudeva had promised Kamsa that he would deliver all the children born of Devaki. Kamsa, being an asura, did not believe that the eighth child would kill him; he took it for granted that he might be killed by any of the children of Devaki. Vasudeva, therefore, to save Devaki, promised to give Kamsa every child, whether male or female. From another point of view, Vasudeva and Devaki were very pleased when they understood that the Supreme Personality of Godhead, Krsna, would come as their eighth son. Vasudeva, a pure devotee of the Lord, was eager to see Krsna appear as his child from the eighth pregnancy of Devaki. Therefore he wanted to deliver all the children quickly so that the eighth turn would come and Krsna would appear. He begot one child every year so that Krsna's turn to appear would come as soon as possible.