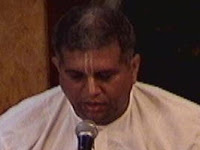 O Vasudeva, you may take back your child and go home. I have no fear of your first child. It is the eighth child of you and Devaki I am concerned with because that is the child by whom I am destined to be killed.

Vasudeva agreed and took his child back home, but because Kamsa had no character and no self-control, Vasudeva knew that he could not rely on Kamsa's word.

The inhabitants of Vrndavana, headed by Nanda Maharaja and including his associate cowherd men and their wives, were none but denizens of the heavenly planets, O Maharaja Pariksit, best of the descendants of Bharata, and so too were the descendants of the Vrsni dynasty, headed by Vasudeva, and Devaki and the other women of the dynasty of Yadu. The friends, relatives and well-wishers of both Nanda Maharaja and Vasudeva and even those who externally appeared to be followers of Kamsa were all demigods.

As previously discussed, the Supreme Personality of Godhead, Visnu, informed Lord Brahma that Lord Krsna would personally descend to mitigate the suffering on the earth. The Lord ordered all the denizens of the heavenly planets to take birth in different families of the Yadu and Vrsni dynasties and in Vrndavana. Now this verse informs us that all the family and friends of the Yadu dynasty, the Vrsni dynasty, Nanda Maharaja and the gopas descended from the heavenly planets to see the pastimes of the Lord. As confirmed in Bhagavad-gita (4.8), the Lord's pastimes consist of paritranaya sadhunam vinasaya ca duskrtam—saving the devotees and killing the demons. To demonstrate these activities, the Lord called for devotees from different parts of the universe.

There are many devotees who are elevated to the higher planetary systems.

"The unsuccessful yogi, after many, many years of enjoyment on the planets of the pious living entities, is born into a family of righteous people, or into a family of rich aristocracy." (Bg. 6.41) Some devotees, having failed to complete the process of devotional service, are promoted to the heavenly planets, to which the pious are elevated, and after enjoying there they may be directly promoted to the place where the Lord's pastimes are going on. When Lord Krsna was to appear, the denizens of the heavenly planets were invited to see the pastimes of the Lord, and thus it is stated here that the members of the Yadu and Vrsni dynasties and the inhabitants of Vrndavana were demigods or almost as good as demigods. Even those who externally helped the activities of Kamsa belonged to the higher planetary systems. The imprisonment and release of Vasudeva and the killing of various demons were all manifestations of the pastimes of the Lord, and because the devotees would be pleased to see these activities personally, they were all invited to take birth as friends and relatives of these families. As confirmed in the prayers of Kunti (SB 1.8.19), nato natya-dharo yatha. The Lord was to play the part of a demon-killer, and a friend, son and brother to His devotees, and thus these devotees were all summoned.