Prepairing our heart for Advent of Krishna 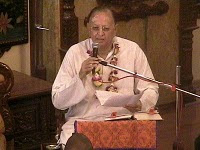 Translation:
Persecuted by the demoniac kings, the Yadavas left their own kingdom and entered various others, like those of the Kurus, Pañcalas, Kekayas, Salvas, Vidarbhas, Nisadhas, Videhas and Kosalas.

Translation:
Some of their relatives, however, began to follow Kamsa's principles and act in his service. After Kamsa, the son of Ugrasena, killed the six sons of Devaki, a plenary portion of Krsna entered her womb as her seventh child, arousing her pleasure and her lamentation. That plenary portion is celebrated by great sages as Ananta, who belongs to Krsna's second quadruple expansion.

Purport:
Some of the chief devotees, such as Akrura, stayed with Kamsa to satisfy him. This they did for various purposes. They all expected the Supreme Personality of Godhead to appear as the eighth child as soon as Devaki's other children were killed by Kamsa, and they were eagerly awaiting His appearance. By remaining in Kamsa's association, they would be able to see the Supreme Personality of Godhead take birth and display His childhood pastimes, and Akrura would later go to Vrndavana to bring Krsna and Balarama to Mathura. The word paryupasate is significant because it indicates that some devotees wanted to stay near Kamsa in order to see all these pastimes of the Lord. The six children killed by Kamsa had formerly been sons of Marici, but because of having been cursed by a brahmana, they were obliged to take birth as grandsons of Hiranyakasipu. Kamsa had taken birth as Kalanemi, and now he was obliged to kill his own sons. This was a mystery. As soon as the sons of Devaki were killed, they would return to their original place. The devotees wanted to see this also. Generally speaking, no one kills his own nephews, but Kamsa was so cruel that he did so without hesitation. Ananta, Sankarsana, belongs to the second catur-vyuha, or quadruple expansion. This is the opinion of experienced commentators.
at August 27, 2011