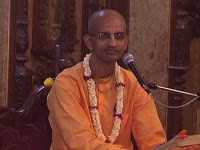 
Translation:
O learned brahmanas, when Sukadeva Gosvami recited Bhagavatam there [in the presence of Emperor Pariksit], I heard him with rapt attention, and thus, by his mercy, I learned the Bhagavatam from that great and powerful sage. Now I shall try to make you hear the very same thing as I learned it from him and as I have realized it.

Purport:
One can certainly see directly the presence of Lord Sri Krsna in the pages of Bhagavatam if one has heard it from a self-realized great soul like Sukadeva Gosvami. One cannot, however, learn Bhagavatam from a bogus hired reciter whose aim of life is to earn some money out of such recitation and employ the earning in sex indulgence. No one can learn Srimad-Bhagavatam who is associated with persons engaged in sex life. That is the secret of learning Bhagavatam. Nor can one learn Bhagavatam from one who interprets the text by his mundane scholarship. One has to learn Bhagavatam from the representative of Sukadeva Gosvami, and no one else, if one at all wants to see Lord Sri Krsna in the pages. That is the process, and there is no alternative. Suta Gosvami is a bona fide representative of Sukadeva Gosvami because he wants to present the message which he received from the great learned brahmana. Sukadeva Gosvami presented Bhagavatam as he heard it from his great father, and so also Suta Gosvami is presenting Bhagavatam as he had heard it from Sukadeva Gosvami. Simple hearing is not all; one must realize the text with proper attention. The word nivista means that Suta Gosvami drank the juice of Bhagavatam through his ears. That is the real process of receiving Bhagavatam. One should hear with rapt attention from the real person, and then he can at once realize the presence of Lord Krsna in every page. The secret of knowing Bhagavatam is mentioned here. No one can give rapt attention who is not pure in mind. No one can be pure in mind who is not pure in action. No one can be pure in action who is not pure in eating, sleeping, fearing and mating. But somehow or other if someone hears with rapt attention from the right person, at the very beginning one can assuredly see Lord Sri Krsna in person in the pages of Bhagavatam.

Thus end the Bhaktivedanta purports of the First Canto, Third Chapter, of the Srimad-Bhagavatam, entitled "Krsna Is the Source of All Incarnations."
at November 16, 2011