Have faith that Krishna will take us to Home 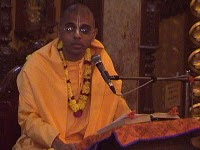 2011-11-06
Srimad Bhagavatam 10.03.32 - Have faith that Krishna will take us to Home (download mp3)
by Sankirtan Prabhu at ISKCON Chowpatty
www.iskcondesiretree.net


Translation:
The Supreme Personality of Godhead replied: My dear mother, best of the chaste, in your previous birth, in the Svayambhuva millennium, you were known as Prsni, and Vasudeva, who was the most pious Prajapati, was named Sutapa.

Purport:
The Supreme Personality of Godhead made it clear that Devaki had not become His mother only now; rather, she had been His mother previously also. Krsna is eternal, and His selection of a father and mother from among His devotees takes place eternally. Previously also, Devaki had been the Lord's mother and Vasudeva the Lord's father, and they were named Prsni and Sutapa. When the Supreme Personality of Godhead appears, He accepts His eternal father and mother, and they accept Krsna as their son. This pastime takes place eternally and is therefore called nitya-lila. Thus there was no cause for surprise or ridicule. As confirmed by the Lord Himself in Bhagavad-gita (4.9):

"One who knows the transcendental nature of My appearance and activities does not, upon leaving the body, take his birth again in this material world, but attains My eternal abode, O Arjuna." One should try to understand the appearance and disappearance of the Supreme Personality of Godhead from Vedic authorities, not from imagination. One who follows his imaginations about the Supreme Personality of Godhead is condemned.

The Lord appears as the son of His devotee by His param bhavam. The word bhava refers to the stage of pure love, which has nothing to do with material transactions.
at November 06, 2011