Krishna is Supreme in all Circumstances 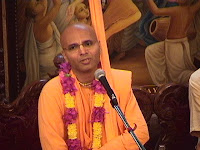 Purport:
As stated in Bhagavad-gita (4.6), sambhavamy atma-mayaya: whatever is done by the Supreme Personality of Godhead is done by His spiritual energy; nothing is forced upon Him by the material energy. This is the difference between the Lord and an ordinary living being. The Vedas say:

It is natural for the Lord to be untinged by material qualities, and because everything is perfectly present in His spiritual energy, as soon as He desires something, it is immediately done. The Lord is not a prakrta-sisu, a child of this world, but by His personal energy He appeared like one. Ordinary people may have difficulty accepting the supreme controller, God, as a human being because they forget that He can do everything by spiritual energy (atma-mayaya). Nonbelievers say, "How can the supreme controller descend as an ordinary being?" This sort of thinking is materialistic. Srila Jiva Gosvami says that unless we accept the energy of the Supreme Personality of Godhead as inconceivable, beyond the conception of our words and mind, we cannot understand the Supreme Lord. Those who doubt that the Supreme Personality of Godhead can come as a human being and turn Himself into a human child are fools who think that Krsna's body is material, that He is born and that He therefore also dies.

In Srimad-Bhagavatam, Third Canto, Fourth Chapter, verses 28 and 29, there is a description of Krsna's leaving His body. Maharaja Pariksit inquired from Sukadeva Gosvami, "When all the members of the Yadu dynasty met their end, Krsna also put an end to Himself, and the only member of the family who remained alive was Uddhava. How was this possible?" Sukadeva Gosvami answered that Krsna, by His own energy, destroyed the entire family and then thought of making His own body disappear. In this connection, Sukadeva Gosvami described how the Lord gave up His body. But this was not the destruction of Krsna's body; rather, it was the disappearance of the Supreme Lord by His personal energy.

Actually, the Lord does not give up His body, which is eternal, but as He can change His body from the form of Visnu to that of an ordinary human child, He can change His body to any form He likes. This does not mean that He gives up His body. By spiritual energy, the Lord can appear in a body made of wood or stone. He can change His body into anything because everything is His energy (parasya saktir vividhaiva sruyate [Cc. Madhya 13.65, purport]). As clearly said in Bhagavad-gita (7.4), bhinna prakrtir astadha: the material elements are separated energies of the Supreme Lord. If He transforms Himself into the arca-murti, the worshipable Deity, which we see as stone or wood, He is still Krsna. Therefore the sastra warns, arcye visnau sila-dhir gurusu nara-matih. One who thinks that the worshipable Deity in the temple is made of wood or stone, one who sees a Vaisnava guru as an ordinary human being, or one who materially conceives of a Vaisnava as belonging to a particular caste is naraki, a resident of hell. The Supreme Personality of Godhead can appear before us in many forms, as he likes, but we must know the true facts: janma karma ca me divyam evam yo vetti tattvatah (Bg. 4.9). By following the instructions of sadhu, guru and sastra—the saintly persons, the spiritual master and the authoritative scriptures—one can understand Krsna, and then one makes his life successful by returning home, back to Godhead.http://iskcondesiretree.info/
at November 18, 2011