Real Peace is Peace of Mind 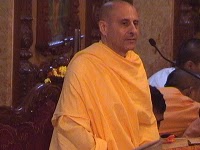 
Translation:
Kamsa immediately got up from bed, thinking, "Here is Kala, the supreme time factor, which has taken birth to kill me!" Thus overwhelmed, Kamsa, his hair scattered on his head, at once approached the place where the child had been born.

Purport:
The word kalah is significant. Although the child was born to kill Kamsa, Kamsa thought that this was the proper time to kill the child so that he himself would be saved. Kala is actually another name of the Supreme Personality of Godhead when He appears only for the purpose of killing. When Arjuna inquired from Krsna in His universal form, "Who are You?" the Lord presented Himself as kala, death personified to kill. By nature's law, when there is an unwanted increase in population, kala appears, and by some arrangement of the Supreme Personality of Godhead, people are killed wholesale in different ways, by war, pestilence, famine and so on. At that time, even atheistic political leaders go to a church, mosque or temple for protection by God or gods and submissively say, "God willing." Before that, they pay no attention to God, not caring to know God or His will, but when kala appears, they say, "God willing." Death is but another feature of the supreme kala, the Supreme Personality of Godhead. At the time of death, the atheist must submit to this supreme kala, and then the Supreme Personality of Godhead takes away all his possessions (mrtyuh sarva-haras caham [Bg. 10.34]) and forces him to accept another body (tatha dehantara-praptih [Bg. 2.13]). This the atheists do not know, and if they do know, they neglect it so that they may go on with their normal life. The Krsna consciousness movement is trying to teach them that although for a few years one may act as a great protector or great watchman, with the appearance of kala, death, one must take another body by the laws of nature. Not knowing this, they unnecessarily waste their time in their occupation as watchdogs and do not try to get the mercy of the Supreme Personality of Godhead. As it is clearly said, aprapya mam nivartante mrtyu-samsara-vartmani: [Bg. 9.3] without Krsna consciousness, one is condemned to continue wandering in birth and death, not knowing what will happen in one's next birth.