Philosophy without Character has no Meaning 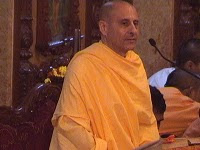 
Translation:
My dear sister Devaki, all good fortune unto you. Everyone suffers and enjoys the results of his own work under the control of providence. Therefore, although your sons have unfortunately been killed by me, please do not lament for them.

Everyone, beginning from the small insect known as indra-gopa up to Indra, the King of the heavenly planets, is obliged to undergo the results of his fruitive activities. We may superficially see that one is suffering or enjoying because of some external causes, but the real cause is one's own fruitive activities. Even when someone kills someone else, it is to be understood that the person who was killed met the fruitive results of his own work and that the man who killed him acted as the agent of material nature. Thus Kamsa begged Devaki's pardon by analyzing the matter deeply. He was not the cause of the death of Devaki's sons. Rather, this was their own destiny. Under the circumstances, Devaki should excuse Kamsa and forget his past deeds without lamentation. Kamsa admitted his own fault, but whatever he had done was under the control of providence. Kamsa might have been the immediate cause for the death of Devaki's sons, but the remote cause was their past deeds. This was an actual fact.