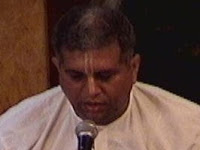 
Translation:
The aborigine women of the Vrndavana area become disturbed by lust when they see the grass marked with reddish kunkuma powder. Endowed with the color of Krsna’s lotus feet, this powder originally decorated the breasts of His beloveds, and when the aborigine women smear it on their faces and breasts, they feel fully satisfied and give up all their anxiety.

Purport:
Srila Prabhupada explains this verse as follows: “The wanton aborigine girls also became fully satisfied when they smeared their faces and breasts with the dust of Vrndavana, which was reddish from the touch of Krsna’s lotus feet. The aborigine girls had very full breasts, and they were also very lusty, but when their lovers felt their breasts, they were not very satisfied. When they came out into the midst of the forest, they saw that while Krsna was walking, some of the leaves and creepers of Vrndavana had turned reddish from the kunkuma powder which fell from His lotus feet. His lotus feet were held by the gopis on their breasts, which were also smeared with kunkuma powder, but when Krsna travelled in the Vrndavana forest with Balarama and His boy friends, the reddish powder fell on the ground. So the lusty aborigine girls, while looking toward Krsna playing His flute, saw the reddish kunkuma on the ground and immediately took it and smeared it over their faces and breasts. In this way they became fully satisfied, although they were not satisfied when their lovers touched their breasts. All material lusty desires can be immediately satisfied if one comes in contact with Krsna consciousness.”
at June 28, 2013