The Deliverance of Mucukunda 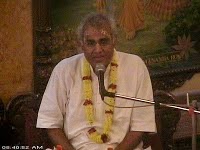 Translation:
As for ourselves, O tiger among men, we belong to a family of fallen ksatriyas, descendants of King Iksvaku. My name is Mucukunda, my Lord, and I am the son of Yauvanasva.

Purport:
It is common in Vedic culture that a ksatriya will humbly introduce himself as ksatra-bandhu, a mere relative in a ksatriya family, or in other words a fallen ksatriya. In ancient Vedic culture, to claim a particular status on the basis of one’s family relations was itself indicative of a fallen position. Ksatriyas and brahmanas should be given status according to their merit, by their qualities of work and character. When the caste system in India became degraded, people proudly claimed to be relatives of ksatriyas or brahmanas, though in the past such a claim, unaccompanied by tangible qualifications, indicated a fallen position.
at October 07, 2014