Krishna Consciousness is a Process of Experience 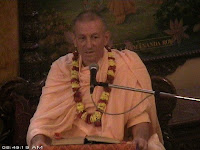 Translation:
Seeing Duryodhana and his companions rushing toward him, Samba, the great chariot-fighter, took up his splendid bow and stood alone like a lion.

Translation:
Determined to capture him, the angry bowmen led by Karna shouted at Samba, ‘Stand and fight! Stand and fight!’ They came straight for him and showered him with arrows.

Translation:
O best of the Kurus, as Krsna’s son Samba was being unjustly harassed by the Kurus, that darling of the Yadu dynasty did not tolerate their attack, any more than a lion would tolerate an attack by puny animals.

Purport:
Commenting on the word acintyarbha, Srila Prabhupada writes in Krsna: “Samba, the glorious son of the Yadu dynasty, [was] endowed with inconceivable potencies as the son of Lord Krsna.”