The Living Bhakti Tradition is a Garden not a Museum 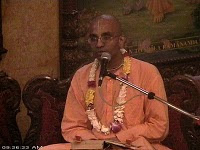 2016-02-28
Srimad Bhagavatam 10.76.28-33 - The Living Bhakti Tradition is a Garden not a Museum (download mp3), and (download mp3 Q&A)
by Chaitanya Charan Prabhu at ISKCON Chowpatty
www.iskcondesiretree.com

Translation:
Quickly regaining consciousness, Lord Krsna’s son Pradyumna said to His charioteer, “O driver, this is abominable — for Me to have been removed from the battlefield!

Translation:
“Except for Me, no one born in the Yadu dynasty has ever been known to abandon the battlefield. My reputation has now been stained by a driver who thinks like a eunuch.


Translation:
“What will I say to My fathers, Rama and Kesava, when I return to Them after having simply fled the battle? What can I tell Them that will befit My honor?


Translation:
“Certainly My sisters-in-law will laugh at Me and say, ‘O hero, tell us how in the world Your enemies turned You into such a coward in battle.’”

Translation:
The driver replied: O long-lived one, I have done this knowing full well my prescribed duty. O my Lord, the chariot driver must protect the master of the chariot when he is in danger, and the master must also protect his driver.


Translation:
With this rule in mind, I removed You from the battlefield, since You had been struck unconscious by Your enemy’s club and I thought You were seriously injured.

Purport:
Thus end the purports of the humble servants of His Divine Grace A.C. Bhaktivedanta Swami Prabhupada to the Tenth Canto, Seventy-sixth Chapter, of the Srimad-Bhagavatam, entitled “The Battle Between Salva and the Vrsnis.”
at February 28, 2016