Use Human Life to Serve Krishna 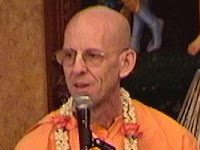 
Translation:
For the conditioned souls, the human body is most difficult to achieve, and it can be lost at any moment. But I think that even those who have achieved human life rarely gain the association of pure devotees, who are dear to the Lord of Vaikuntha.

Purport:
According to Srila Sridhara Svami, the word dehinam means bahavo deha bhavanti yesam te, “the conditioned souls, who accept innumerable material bodies.” According to some wishful thinkers a living entity in the human form of life will never be degraded to a lower form such as that of an animal or plant. But despite this wishful thinking, it is a fact that according to our activities at the present, we will be elevated or degraded by the laws of God. At the present time in human society there is no clear or precise understanding of the nature of life. Foolish scientists have invented highly sophisticated terminologies and theories to bluff innocent people into believing that life comes from chemical reactions. His Divine Grace A.C. Bhaktivedanta Swami Prabhupada has exposed this bluff in his book Life Comes from Life, which points out that although scientists claim that life comes from chemicals, they cannot produce so much as an insect, even from unlimited quantities of chemicals. Actually, life and consciousness are symptoms of the spirit soul.

In Life Comes from Life (page 43), Srila Prabhupada has stated, “Living beings move from one bodily form to another. The forms already exist. The living entity simply transfers himself, just as a man transfers himself from one apartment to another. One apartment is first class, another is second class, and another is third class. Suppose a person comes from a lower-class apartment to a first-class apartment. The person is the same. But now, according to his capacity for payment, or karma, he is able to occupy a higher-class apartment. Real evolution does not mean physical development, but development of consciousness.” Within every species of life there is consciousness, and that consciousness is the symptom of the living entity, who is the superior energy of the Supreme Personality of Godhead. Without understanding this essential point of the transmigration of the conscious living entity throughout 8,400,000 species of life, one cannot possibly understand the words durlabho manuso dehah, “the human body is very rarely achieved.”

People are now being cheated of this essential understanding. They are completely unaware of the danger of slipping back into the eight million species that lie below the human species. It is natural that a human being think in terms of progress. We want to feel that our life is progressing and that we are advancing and improving the quality of our life. Therefore, it is urgent that people be informed of the great danger of misusing the valuable human life and that they know of the great opportunity the human life affords, the opportunity to take to Krsna consciousness. Just as on earth different residential areas are divided into high class, middle class and low class, within the universe there are upper-class, middle-class and lower-class planets. By practice of the yoga system, or by meticulous execution of religious rituals, one can transfer himself to the higher planets within this universe. On the other hand, by neglecting religious principles one will degrade himself to a lower planet. But the Supreme Lord, Krsna, declares in Bhagavad-gita (8.16), abrahma-bhuvanal lokah punar avartino ’rjuna. Thus the final conclusion is that every planet within the material universe is an unsuitable and inappropriate residence, because on each planet there are the primal defects old age and death. The Lord assures us, however, that in His transcendental abode, which lies far beyond the material cosmos, life is everlasting, blissful and absolutely cognizant. The material world is temporary, troublesome and rife with ignorance, but the spiritual world, called Vaikuntha, is eternal, blissful and full of perfect knowledge.

The highly evolved human brain is a gift given by God so that we may use our intelligence to distinguish between that which is eternal and that which is temporary. As stated in Bhagavad-gita (2.16):

“Those who are seers of the truth have concluded that matter has no permanent existence whereas the spirit soul never ceases to exist. Learned seers have concluded this by studying the nature of both.”

Those who have accepted the Supreme Lord and His abode as the ultimate goal of life are called vaikuntha-priya. Here King Nimi states that to have the personal association of such learned transcendentalists is certainly the perfection of human life. In this connection Srila Bhaktisiddhanta Sarasvati Thakura suggests that we consider the following verse:

“[The Supreme Lord said:] The best of bodies, a human body, is a great attainment, rarely achieved, and may be compared to a boat. The guru is an expert captain for this boat, and I have sent favorable winds (the Vedas). Thus I have given all facilities for crossing over the ocean of material existence. Any human being who has achieved these excellent facilities of human life but does not cross over the material ocean is to be considered the killer of his own self.” (Bhag. 11.20.17)

According to Srila Bhaktisiddhanta Sarasvati, the eternal servants of the Supreme Lord, being controlled by powerful feelings of mercy, descend into the material world as Vaisnavas to deliver the conditioned souls who are bound by the results of their own mundane work. Such Vaisnavas also distribute their mercy to those who are laboriously searching after the impersonal Absolute. Sri Narada Muni has stated that without ecstatic love of Godhead such laborious, impersonal contemplation of the Absolute is certainly troublesome (naiskarmyam apy acyuta-bhava-varjitam), and what to speak of the innumerable problems of ordinary gross materialistic life. We have practical experience that in the Western countries most people are working hard to get money, laboring under heavenly dreams of sense gratification. Others, having become frustrated with ordinary materialistic life, are trying to negate their personal existence and merge into the existence of God through so-called yoga and meditation. Both classes of unhappy people are receiving the mercy of the Krsna consciousness movement, putting aside their dreams of sense gratification as well as their troublesome impersonal speculation. They are learning to chant the holy names of God, dance in ecstasy, and feast on the holy food offered to the Lord. They become enlivened by the transcendental knowledge spoken by the Lord Himself in the Bhagavad-gita. As the Lord states in Bhagavad-gita (9.2), susukham kartum avyayam. The actual process of spiritual freedom is joyful to perform and has nothing to do with fruitive activities aimed at sense gratification or with dry impersonal speculation. More and more people are taking to the process of Krsna consciousness, becoming joyful, and eagerly distributing Krsna’s mercy to others. Thus the whole world will be enlivened and inspired by the Krsna consciousness movement, which is the practical demonstration of the mercy of the Vaisnavas.
at April 14, 2017