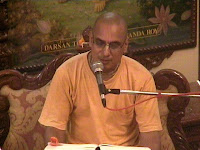 The son of Caksu known as Caksusa was the sixth Manu. He had many sons, headed by Puru, Purusa and Sudyumna.

During the reign of Caksusa Manu, the King of heaven was known as Mantradruma. Among the demigods were the Apyas, and among the great sages were Havisman and Viraka.

In this sixth manvantara millennium, Lord Visnu, the master of the universe, appeared in His partial expansion. He was begotten by Vairaja in the womb of his wife, Devasambhuti, and His name was Ajita.

By churning the ocean of milk, Ajita produced nectar for the demigods. In the form of a tortoise, He moved here and there, carrying on His back the great mountain known as Mandara.

King Pariksit inquired: O great brahmana, Sukadeva Gosvami, why and how did Lord Visnu churn the ocean of milk? For what reason did He stay in the water as a tortoise and hold up Mandara Mountain? How did the demigods obtain the nectar, and what other things were produced from the churning of the ocean? Kindly describe all these wonderful activities of the Lord.

My heart, which is disturbed by the three miserable conditions of material life, is not yet sated with hearing you describe the glorious activities of the Lord, the Supreme Personality of Godhead, who is the master of the devotees.

Sri Suta Gosvami said: O learned brahmanas assembled here at Naimisaranya, when Sukadeva Gosvami, the son of Dvaipayana, was thus questioned by the King, he congratulated the King and then endeavored to describe further the glories of the Supreme Personality of Godhead.

Sukadeva Gosvami said: When the asuras, with their serpent weapons, severely attacked the demigods in a fight, many of the demigods fell and lost their lives. Indeed, they could not be revived. At that time, O King, the demigods had been cursed by Durvasa Muni, the three worlds were poverty-stricken, and therefore ritualistic ceremonies could not be performed. The effects of this were very serious.

It is described that while Durvasa Muni was passing on the road, he saw Indra on the back of his elephant and was pleased to offer Indra a garland from his own neck. Indra, however, being too puffed up, took the garland, and without respect for Durvasa Muni, he placed it on the trunk of his carrier elephant. The elephant, being an animal, could not understand the value of the garland, and thus the elephant threw the garland between its legs and smashed it. Seeing this insulting behavior, Durvasa Muni immediately cursed Indra to be poverty-stricken, bereft of all material opulence. Thus the demigods, afflicted on one side by the fighting demons and on the other by the curse of Durvasa Muni, lost all the material opulences in the three worlds.

To be extremely opulent in materialistic advancement is sometimes very risky. The materially opulent person does not care about anyone, and thus he commits offenses to great personalities, such as devotees and great saints. This is the way of material opulence. As described by Sukadeva Gosvami, dhana-durmadandha: too much wealth makes one blind. This happens even to Indra in his heavenly kingdom, and what to speak of others in this material world? When one is materially opulent, he should learn to be sober and well-behaved toward Vaisnavas and saintly persons; otherwise he will fall down.