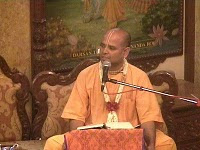 It is said that when Brahma and the other demigods go to see the Supreme Personality of Godhead in Svetadvipa, they cannot directly see Him, but their prayers are heard by the Lord, and the needful action is taken. This we have seen in many instances. The word sruta-purvaya is significant. We get experience by directly seeing or by hearing. If it is not possible to see someone directly, we can hear about him from authentic sources. Sometimes people ask whether we can show them God. This is ludicrous. It is not necessary for one to see God before he can accept God. Our sensory perception is always incomplete. Therefore, even if we see God, we may not be able to understand Him. When Krsna was on earth, many, many people saw Him but could not understand that He is the Supreme Personality of Godhead. Avajananti mam mudha manusim tanum asritam [Bg. 9.11]. Even though the rascals and fools saw Krsna personally, they could not understand that He is the Supreme Personality of Godhead. Even upon seeing God personally, one who is unfortunate cannot understand Him. Therefore we have to hear about God, Krsna, from the authentic Vedic literature and from persons who understand the Vedic version properly. Even though Brahma had not seen the Supreme Personality of Godhead before, he was confident that the Lord was there in Svetadvipa. Thus he took the opportunity to go there and offer prayers to the Lord.

These prayers were not ordinary concocted prayers. Prayers must be approved by Vedic literature, as indicated in this verse by the words daivibhir girbhih. In our Krsna consciousness movement we do not allow any song that has not been approved or sung by bona fide devotees. We cannot allow cinema songs to be sung in the temple. We generally sing two songs. One is sri-krsna-caitanya prabhu nityananda sri-advaita gadadhara srivasadi-gaura-bhakta-vrnda. This is bona fide. It is always mentioned in the Caitanya-caritamrta, and it is accepted by the acaryas. The other, of course, is the maha-mantra—Hare Krsna, Hare Krsna, Krsna Krsna, Hare Hare/ Hare Rama, Hare Rama, Rama Rama, Hare Hare. We may also sing the songs of Narottama dasa Thakura, Bhaktivinoda Thakura and Locana dasa Thakura, but these two songs—"sri-krsna-caitanya" and the Hare Krsna maha-mantra—are sufficient to please the Supreme Personality of Godhead, although we cannot see Him. Seeing the Lord is not as important as appreciating Him from the authentic literature or the authentic statements of authorized persons.