Understanding The Lord By Heart 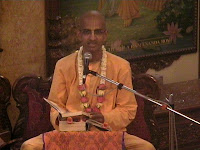 The Lord's glorious activities referred to in this connection took place after His personal bodyguards Jaya and Vijaya became Daityas, having been cursed by the great sages Sanaka, Sanatana, Sanat-kumara and Sanandana. Jaya, as Hiranyaksa, had to fight with Varahadeva, and that same Varahadeva is mentioned in regard to the Raivata millennium. The fighting, however, took place during the reign of the first Manu, Svayambhuva. Therefore according to some authorities there are two Varahas. According to others, however, Varaha appeared during the regime of Svayambhuva Manu and stayed in the water until that of Raivata Manu. Some may doubt that this could be possible, but the answer is that everything is possible. If one could count the atoms within the universe, one could count the qualities of Lord Visnu. But the atoms of the universe are impossible for anyone to count, and similarly no one can count the transcendental qualities of the Lord.