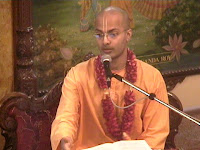 O demons, as monkeys, jackals and dogs are unsteady in their sexual relationships and want newer and newer friends every day, women who live independently seek new friends daily. Friendship with such a woman is never permanent. This is the opinion of learned scholars.

Sri Sukadeva Gosvami continued: After the demons heard the words of Mohini-murti, who had spoken as if jokingly, they were all very confident. They laughed with gravity, and ultimately they delivered the container of nectar into Her hands.

The Personality of Godhead in His form of Mohini was certainly not joking but talking seriously, with gravity. The demons, however, being captivated by Mohini-murti's bodily features, took Her words as a joke and confidently delivered the container of nectar into Her hands. Thus Mohini-murti resembles Lord Buddha, who appeared sammohaya sura-dvisam [SB 1.3.24] to cheat the asuras. The word sura-dvisam refers to those who are envious of the demigods or devotees. Sometimes an incarnation of the Supreme Personality of Godhead cheats the atheists. Thus we see here that although Mohini-murti was speaking factually to the asuras, the asuras took Her words to be facetious. Indeed, they were so confident of Mohini-murti's honesty that they immediately delivered the container of nectar into Her hands, as if they would allow Her to do with the nectar whatever She liked, whether She distributed it, threw it away or drank it Herself without giving it to them.