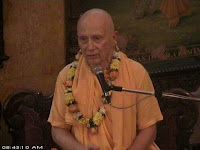 
Translation:
Surrounding Lord Indra, King of heaven, were the demigods, seated on various types of vehicles and decorated with flags and weapons. Present among them were Vayu, Agni, Varuna and other rulers of various planets, along with their associates.


Translation:
The demigods and demons came before each other and reproached one another with words piercing to the heart. Then they drew near and began fighting face to face in pairs.


Translation:
O Maharaja Pariksit, suppressor of enemies [Arindama], Lord Siva fought with Jambha, and Vibhavasu fought with Mahisasura. Ilvala, along with his brother Vatapi, fought the sons of Lord Brahma. Durmarsa fought with Cupid, the demon Utkala with the Matrka demigoddesses, Brhaspati with Sukracarya, and Sanaiscara [Saturn] with Narakasura. The Maruts fought Nivatakavaca, the Vasus fought the Kalakeya demons, the Visvedeva demigods fought the Pauloma demons, and the Rudras fought the Krodhavasa demons, who were victims of anger.


Translation:
All of these demigods and demons assembled on the battlefield with a fighting spirit and attacked one another with great strength. All of them desiring victory, they fought in pairs, hitting one another severely with sharpened arrows, swords and lances.


Translation:
The elephants, horses, chariots, charioteers, infantry soldiers and various kinds of carriers, along with their riders, were slashed to pieces. The arms, thighs, necks and legs of the soldiers were severed, and their flags, bows, armor and ornaments were torn apart.

Because of the impact on the ground of the legs of the demons and demigods and the wheels of the chariots, particles of dust flew violently into the sky and made a dust cloud that covered all directions of outer space, as far as the sun. But when the particles of dust were followed by drops of blood being sprinkled all over space, the dust cloud could no longer float in the sky.

In the course of the battle, the warfield became strewn with the severed heads of heroes, their eyes still staring and their teeth still pressed against their lips in anger. Helmets and earrings were scattered from these severed heads. Similarly, many arms, decorated with ornaments and clutching various weapons, were strewn here and there, as were many legs and thighs, which resembled the trunks of elephants.


Translation:
Many headless trunks were generated on that battlefield. With weapons in their arms, those ghostly trunks, which could see with the eyes in the fallen heads, attacked the enemy soldiers.