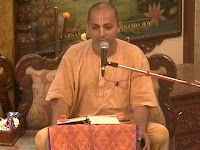 Translation:
When Lord Brahma understood that the Supreme Personality of Godhead was now within the womb of Aditi, he began to offer prayers to the Lord by reciting transcendental names.